Points You Must Know About FBA Amazon Reimbursement

By: Mary / Amazon fba, Asinwiser / Comments Off on Points You Must Know About FBA Amazon Reimbursement

Points You Must Know About FBA Amazon Reimbursement

Online sellers on Amazon require additional funds for the smooth operation of their business. Then comes Amazon FBA reimbursement to have your back. It helps to turn a deficit into a profit and is a powerful technique to boost your revenue.

In this article, we will learn about 4 points that you should know about FBA Amazon reimbursement. Let’s start.

For most FBA-related transactions, Amazon offers sellers an 18-month timeframe to perform an FBA audit. Furthermore, under Amazon’s FBA reimbursement policy, sellers can file claims for any eligible inconsistencies and receive compensation.

Inventory that is lost during the initial FBA inbound receiving is a regular logistical problem.

Moreover, your FBA inventory can potentially get misplaced, damaged, destroyed, or disappear once it arrives at the FBA center.

In addition, when Amazon incorrectly overcharges sellers on FBA pick and pack fees. Then, it causes a large financial imbalance that can cut FBA fees once corrected.

The cause for this is that Amazon’s data contains erroneous weight and size information. Nevertheless, Amazon only allows for reimbursements to be made within a 90-day time frame.

As a result, Amazon sellers must audit their Amazon FBA transactions at least every 90 days now more than ever before.

Amazon sellers must take advantage of any FBA reimbursements available to them under Amazon’s terms and conditions. However, if they are careless then they might suffer huge losses.

Note that the cost of inventory is the initial loss. The price a seller pays to obtain an item.

Furthermore, the loss of profit is the second type of loss. The reason for this is that when a seller is paid, Amazon effectively purchases the affected inventory from the seller. It is considered as if it were sold on Amazon’s marketplace.

In addition, selling things on Amazon generates a healthy profit for the majority of Amazon merchants.

As a result, if you recover the maximum amount of FBA reimbursements, the double loss will become a double win. And, FBA reimbursements effectively turn a weakness into a strength by recovering both your cost of goods and profit.

You owe it to your business to earn the most reimbursements. Moreover, you can use an Amazon FBA auditing service such as GETIDA. It will ensure that you’re getting paid everything you’re owed. Moreover, the primary reason for this is because GETIDA only levies a recovery fee on FBA reimbursements that are successful.

Note that, there is no charge if no Amazon reimbursement is obtained. Every dollar of recovery adds value to your company, especially during difficult circumstances.

Interestingly, it only takes 4 minutes to sign up for GETIDA. Next, you’ll have quick access to a free dashboard with data analytics and visibility into your Amazon account. The dashboard will also provide you with a free estimate of how much FBA reimbursements you might be eligible for.

We hope this article helped to comprehend points that are associated with FBA Amazon Reimbursement. Good Luck!

An intelligent software tool—Asinwiser— is what you need as an Amazon. It is an impeccable solution for all your needs, including product research,  competitor research, fba calculator, fba fee calculator and profitability calculator. 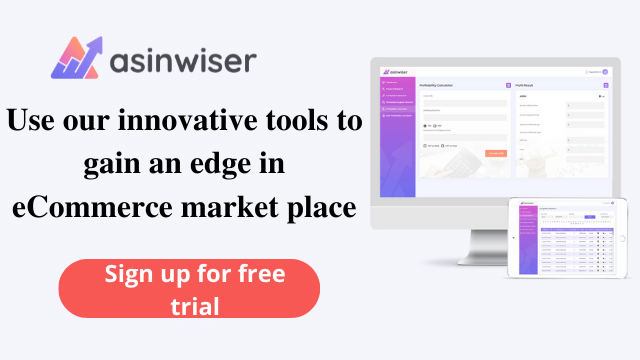