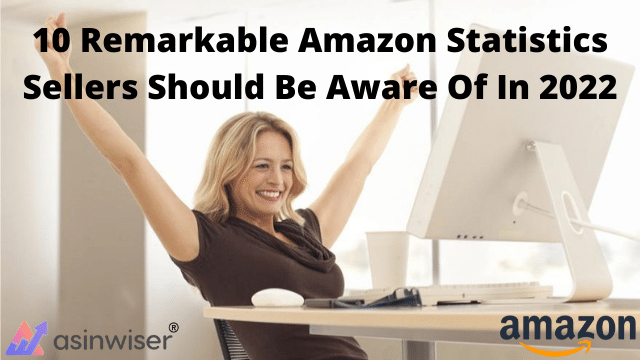 10 Remarkable Amazon Statistics Sellers Should Be Aware Of In 2022

Jeff Bezos founded Amazon as an online bookstore over 25 years ago. During the first two months, Bezos was able to sell his books in fifty states and 45 countries, as per Amazon’s book sales statistics. It has since grown to become the biggest and most famous retailer, selling everything under the sun.

Amazon is now a trusted brand and a symbol of online shopping. Its target market has been expanded to include all types of customers around the world. Internet shopping has become even more famous during the COVID-19 pandemic, resulting in Amazon’s stock skyrocketing.

1. Nine out of ten people look up a product’s price on Amazon

Amazon, which controls nearly half of the US online market, is one of the people’s first places when looking for and reviewing products. 90% of individuals will browse for the same amazon store even if they find it on a rival’s website. Why? Because Amazon is well-known for its low prices, lightning-fast shipping, and dependable customer service.

2. 2% of Echo owners have used Alexa to make a purchase

Over 50 million Amazon Echos have been purchased since its launch in 2015. However, while Alexa, Echo’s voice-activated assistant, allows users to make purchases, check the status of their orders placed, and recommend products using nothing but their voice, only a tiny percentage of customers do so.

Only 2% of Echo owners, or about 1 million people, have used their smart speaker to make an Amazon purchase. While Alexa’s voice-activated feature certainly simplifies the buying process, it appears that customers still prefer to look at products and view their grocery carts before making a purchase.

3. Amazon has over 12 million products for sale

Amazon must sell as much merchandise across as many industries as possible as part of its efforts to help customers “explore anything they might want to shop online.” Amazon has amassed an incredible catalog of over 12 million products, books, media, wine, and services in its quest to be everything to everyone. If you include Amazon Marketplace sellers, the total number of products is closer to 350 million.

4. Over 1.1 million home maintenance products are sold on Amazon

For a long time, it was thought that the home maintenance industry was immune to the dreaded “Amazon Effect.” The convenience of having a specialist help you pinpoint the right design and the impulsive nature of many home renovations continued to drive customers to major brick-and-mortar stores like Home Depot and Lowe’s.

According to the latest study by Jumpshot, Amazon has over 80% market share in the home appliance market, and its trends continue to outpace the rest of the industry.

5. In the United States, 95 million people have Amazon Prime memberships

In 2018, Registered users spent $1,400 on Amazon, compared to around $600 for non-Prime participants. That means Prime members spend more than twice as much as non-Prime members on an annual basis.

This statistic isn’t all that remarkable when you think about it. Prime participants are more likely to shop on Amazon regularly because they are already loyal customers.

Enrolling in FBA has been shown to increase your SKUs’ lead generation and the amount of money you make. The Amazon Prime program plays a significant role in this. Online shoppers, on the whole, despite having to pay for shipping. Prime members receive free two-day delivery on all Prime-eligible goods, making them much more likely to buy products with the Prime checkmark.

8. In 2017, Amazon shipped over 5 billion items around the world

The most significant benefit of FBA for most merchants is that Amazon manages and controls shipping and any shipment customer service issues. And it’s not without reason. When it comes to shipping, Amazon is the master.

Amazon has gone out of its way to provide customers with the swiftest online shipping, from its significant number of worldwide warehouses to its elaborate system of logistics partners and delivery drivers.

9. Third-party sellers account for more than half of all Amazon sales

Amazon continues to attract third-party sellers, a trend that has been growing for several years and does not appear to be decelerating down anytime soon. The percentage of Amazon third-party merchants has steadily increased over the last five years, soaring from 40% in 2013 to 53% at the end of 2018.

10. Eighty percent of Amazon sellers also sell on other platforms

No seller should overlook Amazon’s unique chance to access a massive audience. As a result, many sellers believe that having an Amazon presence is critical to their business’s growth and success. However, it is not the only option. More than 80% of sellers conduct eCommerce business through other online platforms, including their websites.

As previously mentioned, third-party sellers face operational challenges, which is one of the reasons why they are hesitant to focus solely on Amazon. Competition is another, perhaps even more important, factor.

An intelligent software tool—Asinwiser— is what you need as an Amazon. It is an impeccable solution for all your needs, including product research,  competitor research, fba-calculator and profitability calculator. 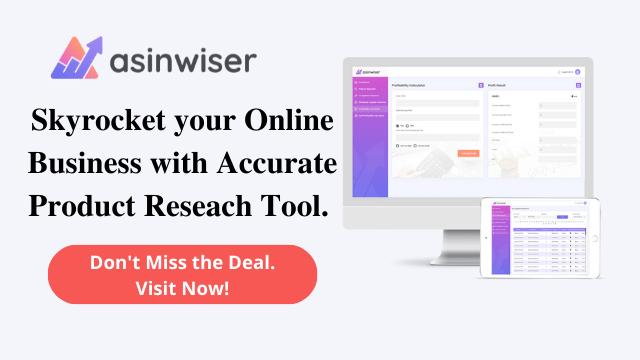